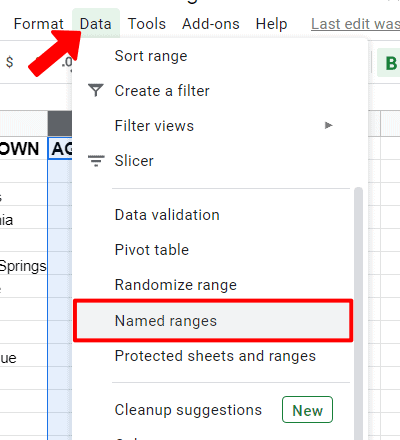 In this tutorial, you will learn how to rename a column in Google Sheets.

How To Rename A Column In Google Sheets

Google Sheets automatically assigns a letter name to each column, which can be used to reference that column in formulas:

The column letters are always visible at the top of each column, even when you scroll down, and they’re easy to type for formulas.

However, sometimes it can be confusing to have to remember what column contains the data you want to reference in a formula, especially if the spreadsheet is large or changes often.

For these cases, we can use Named Ranges to give columns names that can be referenced in formulas more easily.

The nice thing about this approach is that even if you change the order of your columns later, the named range will move with the column so you don’t have to worry about changes to the spreadsheet.

How to Name a Column Using Named Ranges

Follow these steps to give your columns names you can easily reference in formulas:

In the Named Ranges sidebar, type in the name you want for your column.

This should be something short but descriptive as you will be using it to reference the column in formulas later.

If your column has a header, a good choice will often be to use the text from the column header as the name.

Once you’ve selected a name for your column, click Done to save the name

How to Reference a Named Column in Formulas

Now that you’ve named your columns, it’s time to use those names in formulas.

Double click on the cell in which you want to add a formula to enter edit mode, then begin typing your formula as you normally would

When you want to reference a column, instead of using the column letter to reference your column, type in the name of the named range.

In this tutorial, I covered how to rename a column in Google Sheets. Want more? Check out all the Google Sheets Tutorials.

Sheets for Marketers is a collection of resources to help marketers learn how to use Google Sheets.

You’ll find tutorials for automating work with spreadsheets + a curated directory of the best templates, tools and reports in the wild.

Want to know when new templates are added to the directory + SEO tool tutorials are released?