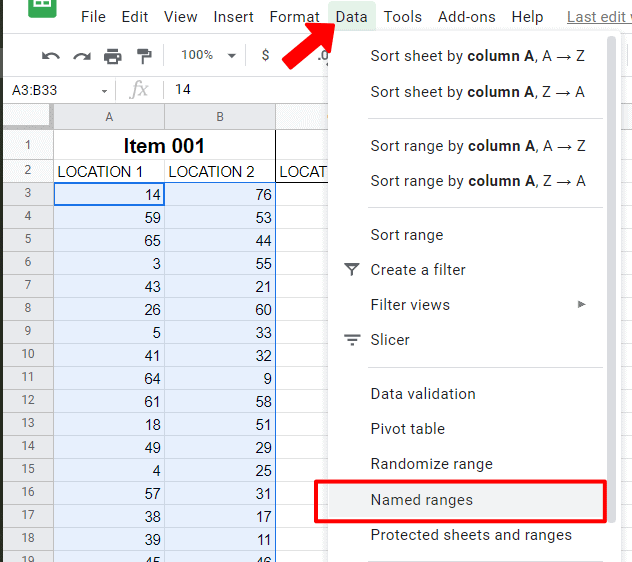 In this tutorial, you will learn how to name ranges in Google Sheets.

How To Name Ranges In Google Sheets

Google Sheets formulas can easily become complex and confusing, making them hard to update and maintain.

One factor adding to this difficulty is the problem of range references in formulas.

While it’s easy to add them to formulas, it’s much harder to remember what data the references point to when you want to update your formulas months or years later.

Using Named Ranges can help with this. Google Sheets allows you to name ranges and use these names later in formulas to reference those ranges more easily

Follow these steps to name ranges in Google Sheets

Use the mouse to highlight the range you want to name

In the Named Ranges sidebar, type in the name you want for your range.

This should be something short but descriptive as you will be using it to reference the range in formulas later.

Once you’ve selected a name, click Done to save the name

How to Reference a Named Ranges in Formulas

Now that you’ve named your ranges, it’s time to use those names in formulas. Here’s how:

Double click on the cell in which you want to add a formula to enter edit mode, then begin typing your formula as you normally would

When you want to reference the range, instead of using the usual A1 cell references, type in the name of the named range.

In this tutorial, I covered how to name ranges in Google Sheets. Want more? Check out all the Google Sheets Tutorials.

Sheets for Marketers is a collection of resources to help marketers learn how to use Google Sheets.

You’ll find tutorials for automating work with spreadsheets + a curated directory of the best templates, tools and reports in the wild.

Want to know when new templates are added to the directory + SEO tool tutorials are released?