In this tutorial, you will learn how to make a bell curve in Google Sheets.

Bell Curves, or Normal Distribution Curves, are commonly used tools in statistics. Bell curves are useful for visualizing what values are normal in a sample or population, and what values are less common. The highest point of the bell curve represents the average of the sample, while the trailing ends represent how wide the distribution is within that sample

Google Sheets doesn’t have a tool for generating a bell curve directly from a sample, but by performing a few calculations before charting the curve it’s possible to generate a bell curve easily in Google Sheets

In order to generate the bell curve, we’ll need to calculate the normal distribution for each point on the curve. This calculation is done using using 4 intermediate calculations:

Here’s how to calculate these values:

To calculate the mean, use the AVERAGE() function: “=AVERAGE(A:A)” where the original dataset is in column A 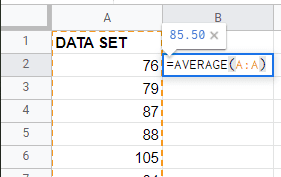 To calculate the Standard Deviation, use this formula: “=STDEV.S(A:A)”

Next, use the high and low values to generate a sequence of numbers representing the X values of every point that will appear in the bell curve. That is, every value starting with the low value and ending with the high value: “=SEQUENCE(F2-G2+1,1,G2)”

And lastly, calculate the normal distribution for each point in the sequence based on the mean and standard deviation. This will be the Y value for each point on the bell curve graph. Type the following formula into cell C2 and drag down for all sequence points in column B: “=NORM.DIST(B2,$D$2,$E$2,false)”

Your data is now ready to graph

Once you’ve followed the above steps to generate the bell curve data, here’s how to insert the graph:

Select the Sequence and Normal Distribution data generated in Steps 4-5 above and open the Insert menu, then choose Chart 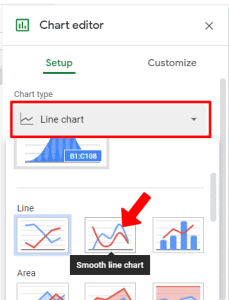 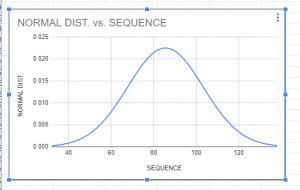 In this tutorial, I covered how to make a bell curve in Google Sheets. Want more? Check out all the Google Sheets Tutorials.