In this tutorial, you will learn how to fill series in Google Sheets.

Manual data entry is time consuming and prone to error, so it’s good to eliminate it wherever possible. A frequent recurring data entry task for spreadsheet users is creating a series of sequential numbers or dates going down a column. While you can manually type each entry in the column, Google Sheets provides a faster solution. You can automatically create a series or list in just a few seconds using the Google Sheets Fill Down tool. Read on to learn how.

Enter the number 1 in the cell you want to start the series in, and the number 2 directly below it

Select the cells containing the 1 and 2 from Step 1. A square, blue drag handle will appear at the lower right corner of the selection 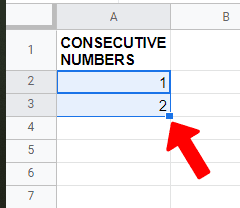 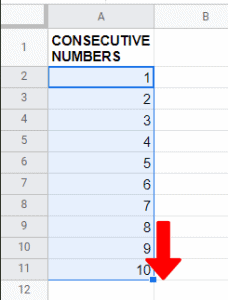 A consecutive number sequence will be generated in the cells

Note that you can start the sequence with any number, you do not have to start with 1

Google Sheets can fill non-consecutive series of numbers, provided the interval between the numbers is always the same. 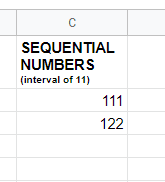 Select the two numbers you’ve entered, then click on the drag handle and drag the series down as far as you need 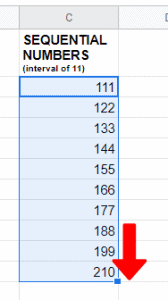 Filling a Date or Month Series

Perhaps even more useful than filling number series is Google Sheets’ ability to fill lists of dates. Like Number series, the dates can be separated by any interval. For example, you can generate a list of every date, every Friday, or a list of consecutive months

Filling a consecutive date series is much the same as the number series listed above. Simply add the first two entries in the series, then drag down and let Google Sheets fill in the rest 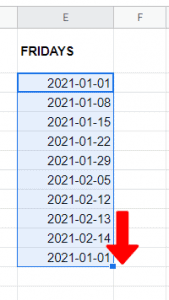 In this tutorial, I covered how to fill series in Google Sheets. Want more? Check out all the Google Sheets Tutorials.