In this tutorial, you will learn how to divide in Google Sheets.

If you need to do division while working in Google Sheets, don’t pull out your calculator.

Doing math in the spreadsheet makes it easier to remember how you calculated your numbers. It also means you can update numbers later without having to recalculate everything.

Here’s how to do basic division in Google Sheets:

Select a cell to enter the formula in.

Next, type the equals sign (=) to begin typing a formula. 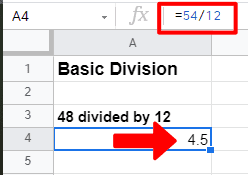 The resulting quotient will appear in the cell.

Often you’ll want to divide numbers that are already in your spreadsheet so that you can update the numbers later without having to retype any formulas.

Select a cell and type equals (=) to start your formula

This time instead of entering numbers, you’ll enter references to cells in your spreadsheet.

If you click on a cell in your spreadsheet after typing equals, Google Sheets will add the reference to that cell into your formula.

Click on the cell that contains the dividend, or number you want to divide, and you’ll see the cell reference appear in the formula bar:

Type the forward slash and click on the cell containing the divisor or number you want to divide by, then hit enter to finish your formula.

Now when you update the numbers in the referenced cells, the quotient will automatically update

In this tutorial, I covered how to divide in Google Sheets. Want more? Check out all the Google Sheets Tutorials.