In this tutorial, you will learn how to calculate variance in google sheets.

If you have a sample of data in Google Sheets, you may want to calculate the Variance of that sample to get insights into the distribution. The variance of a sample measures the degree to which the average datapoint in the set differs from the mean. It can be useful for statistical analysis in and of itself, but is also a step in calculating standard deviation. Read on to learn how to calculate variance in Google Sheets.

Calculate Variance of a Sample

In most cases, the data in your spreadsheet will represent a sample, not the entire population, so you’ll want to use the VAR() function, which calculates variance for a sample. Here’s how:

Enter your sample data in a single column in Google Sheets 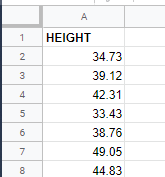 Select a cell to calculate variance in and type the following formula: “=VAR(A2:A21)”, where the range A2:A21 contains the sample data

Hit enter and the variance will calculate. By default, Google Sheets will show eight decimal places, but you can reduce this by clicking on the Decrease Decimal Places button in the toolbar as many times as desired 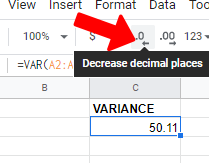 Calculate Variance of an Entire Population

Population variance can be calculated following the same steps as sample variance, simply use the VARP() function instead of VAR(). The P stands for Population. So for population data stored in the range A2:A21, the formula is: “=VARP(A2:A21)”

In this tutorial, I covered how to calculate variance in google sheets. Want more? Check out all the Google Sheets Tutorials.