In this tutorial, you will learn how to calculate average on Google Sheets.

There are three main types of average that you may want to calculate when working in Google Sheets: The Mean, Median, and Mode. Fortunately Google Sheets has functions for each of these so all three are easy to calculate.

This tutorial goes through each type of average in turn and describes what it is and the corresponding Google Sheets function.

The most basic type of average is the mean. If someone refers to the average without specifying the type of average, this is what they are most likely referring to. Because of this, the Google Sheets function used to calculate the mean is simply called AVERAGE

The mean of a data set is the sum of all numbers in the dataset, divided by the number of data points.

Here’s how to calculate the mean in Google Sheets:

Select the cell you want to calculate the mean in and type the following formula: “=AVERAGE(A:A)”, where the data set you want to find the mean of is stored in column A 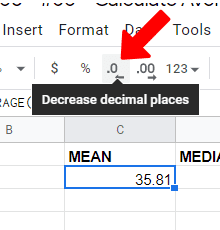 Another type of average is the median. The median of a data set is the middle number if all numbers are ranked in order, or the mean of the two middle numbers if there are an even number of numbers.

To calculate the median, follow the steps above for calculating the mean, but use the MEDIAN function.

To calculate the mode of a data set, follow the steps for calculating the mean but use the MODE function.

In this tutorial, I covered how to calculate average on Google Sheets. Want more? Check out all the Google Sheets Tutorials.